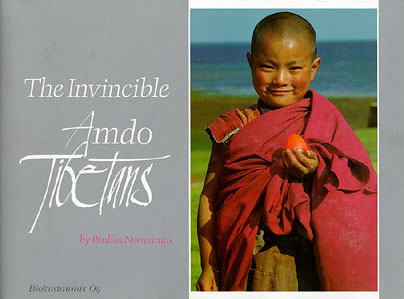 Preface by His Holiness the Dalai Lama

This collection of photographs entitled Invincible Amdo Tibetans takes me back to my infancy. As many people know, I myself was born in the region of Tibet called Amdo in a place called Taktser. It is a beautiful land. My own village, situated on a small plateau, was surrounded by fields of wheat and barley. The plateau, in turn, was encircled by rolling hills covered in lush green grass. To the south of the village was a mountain higher than the rest, which local people called 'The Mountain that Pierces the Sky'. It was regarded as the abode of the local guardian deity. Its lower slopes were covered in forest, above which abundant rich grass could be seen. Higher still, the rock was bare and on the summit was a patch of snow that never melted. On the northern face of the mountain grew junipers and poplars, peaches, plums and walnuts, and bushes with many kinds of berries and scented flowers. Water from clear springs fell in cascades. Birds and the wild animals: deer, wild asses, monkeys, a few leopards, bears and foxes, all wandered unafraid of man. As Buddhists, our people would never willingly harm a living creature.

Amid this natural splendour stood monasteries like Karma Shar Tsong Ritro, Amdo Jhakhyung, and others. They not only added colour, but gave an air of sanctity to the whole neighbourhood. At the many monasteries and temples anybody could pray and make offerings. Indeed, the whole of our way of life revolved around religion.

The people of Amdo are mostly tall and strong, hardy and brave by nature. But because of their faith in the nonviolent teachings of the Buddha, they are characterised by gentleness, humility, charity, and a consideration for all other beings. It was among such amiable people that I was born, to a family of pure Tibetan stock, whose forebears came from Central Tibet.

Following a massive immigration programme, the Chinese population in Tibet now clearly exceeds that of Tibetans. Today, in most cities and towns in Amdo, Tibetans are in a minority. My compatriots are today at risk of becoming no more than a tourist attraction in their own homeland. This publication vividly depicts the unique qualities of the land and people of Amdo. Like all Tibetans, they have a right to maintain their identity and pursue their way of life free of interference. I hope that whoever enjoys this book will join me in looking forward to the day when that freedom dawns once more.